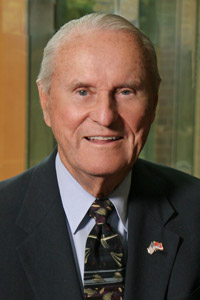 Lawrence E. Carr, Jr. was the founding member of Carr Maloney and concentrated his practice on environmental coverage litigation throughout the United States. The firm’s first noteworthy case involved controversy and tragedy of the Vietnam Era, Agent Orange, and its health effects on veterans. The firm began to garner national recognition for successfully handling landmark, precedent-setting cases in May 1984 when In re Agent Orange Product Liability Litigation settled just before trial.

Larry was stationed in China with the United States Marine Corps from 1945-1946. He received two degrees from the University of Notre Dame upon his return, a Bachelor of Science in 1948 and a Bachelor of Laws in 1949. He was admitted to the Colorado Bar in 1949, but returned to active duty military service following America’s 1950 entrance into the Korean War. At the conclusion of his active duty career, Larry resumed his education and received a Master of Laws degree from George Washington University in 1954. He would continue on as a Reserve Member of the United States Marine Corps, eventually retiring as a Colonel after 30 years of service.

Larry believed that a great attorney was well-rounded, enjoyed working with their peers, and was dedicated to establishing great relationships with their clients. This has been the hallmark of Carr Maloney since its inception.

Larry’s obituary in The Washington Post can be found at: http://www.legacy.com/obituaries/washingtonpost/obituary.aspx?pid=176643033